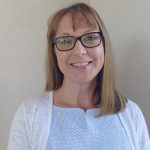 Cheryl Bartley is transferring her membership from Bennett Memorial United Methodist Church of Henderson, Kentucky.  She and husband Tom have been married for 27 years and have two sons.  Cheryl worked as a paraprofessional librarian before retiring. She enjoys crafts, movies and hiking. 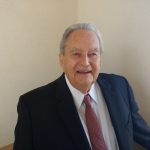 Jack Cook is joining us in re-affirmation of faith.  Born of a Scottish father and Native American mother, he grew up with an older sister and younger brother in Brantford, Ontario, Canada.  He enlisted and served in the United States Air Force.  Graduating college in Tennessee in civil and structural engineering, he held various executive positions in different companies, and owned Fun Time Playgrounds. He has three granddaughters and two great-grandchildren, Duke and Olive.  Jack enjoys ocean fishing, travel, auto racing, hockey and football. 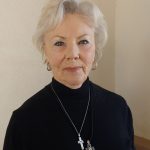 Pepper Denham is transferring from Desert Palm United Church of Christ, in Tempe.  She grew up in Akron, Ohio’s Fairlawn Heights; earned a degree in interior and exterior design. She was the first woman to join the National Association of Home Builders. Pepper is the mother of three children, six grandchildren and four great-grandchildren.  She enjoys the Krafters group, biking, reading, and going for walks.

Mike and Kelly Murray are transferring their membership from Desert Cross Lutheran Church, in Tempe.  Mike says, “One of the highlights of my life is retirement. I now have time to play golf, sing to my heart’s content, read, and travel with my beautiful wife.” Kelly was raised in McCall, Idaho, where she worked after school in her father’s hardware store. Her fondest memories are relocating to Phoenix to enjoy the lack of northern winters; and working with a CPA firm. Kelly enjoys bird watching, music, reading, bridge, travel, and her children, Andy and Jen. 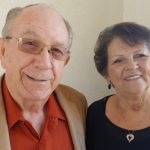 Pete and Lynn Reinecker are transferring their membership from Oregon City United Methodist Church. Pete was born in western Kansas and graduated from McPherson College. He is retired from Qwest Communications in Portland. Pete’s top highlights are giving his son a second chance at life; twenty-four years ago he donated one of his kidneys, and today his son is doing fine. He recently served as President of the US JCI Senate, an organization of 8000 members. Pete enjoys coin collecting, golf and watching sporting events. Lynn was born in Washington; she worked and is now retired from a real estate profession. She and Pete have four daughters and two sons. Their children have blessed them with ten grandchildren and three great-grandchildren.  Another highlight was being First Lady of the US JCI Senate last year. They traveled over 100,000 miles, visiting different locations in the United States. She enjoys antique tea collections and crafts. 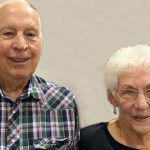 Art and Carol Schuh are joining us in re-affirmation of faith. They both were born and raised in Chicago. Art is retired from AT&T and Carol from the retail industry.  The highlight of their lives has been living the RV lifestyle in their fifth wheel and traveling throughout the United States. They love boating and water skiing. Art enjoys wood crafting, and Carol enjoys crafts, painting and bowling.